The finger pointing at the moon is not the moon. What’s the meaning of this statement?

Suppose a kid comes and tells to you – “I have never seen the moon, can you show it to me.” You take the kid to the terrace of your house and point your index finger to the moon and say – “That is the moon.” So saying you bring your hand down. The kid, instead of looking at the moon you pointed to, is looking at your index finger – assuming that the index-finger is the moon. After staring at your finger for sometime the kid says – “the moon is not so interesting!”

The finger pointing at the moon is not the moon. What’s the philosophical relevance of this statement in our lives?

Suppose that you and I are driving our car from Bangalore to Hampi to visit the Jaina Temple. Enroute to the temple we see a signpost like the one below. 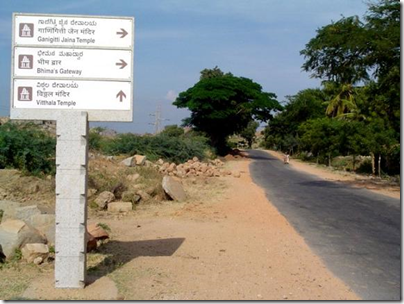 The moment we see the signpost we stop the car by the side and catch hold of the signpost and say “ah.. Temple! Temple!.. we got our temple!” How absurd is that?

Commonsense says that the signpost pointing towards the direction of the temple, is not the temple. That’s exactly what – the finger pointing at the moon is not moon means.

As a race, we have a dysfunction in all of us. We don’t know the difference between the finger and the thing that it is pointing to. We don’t make a distinction between, say, a book and the knowledge it is imparting to us. We read the book from cover to cover and then become fans of the book. We protect the book and advertise about the book – all the while not paying attention to its content. I am not saying that once we read the book we should rip it apart or that we should not tell other people about it. I am saying that we should consider that the book is a signpost, leading us to some knowledge. We should perhaps first make an effort to get that!

We don’t make a difference between the messenger and the message. A “messenger” is someone who is delivering a “message”. But we are all so dysfunctional that the moment we hear the message, we get attached to the messenger. This is exactly what is happening with “spiritual gurus”. The guru is communicating a message to us – but we get attached to the guru. We sing praises about the guru, we get more people to follow the guru, we create a cult following for the guru and we also get to the point of playing politics in the name of the guru (my guru is better and more than yours! OR my guru is the only guru in the whole world, your guru is useless).

In my opinion – that’s exactly what’s wrong with the Landmark Education followers. Granted that the Landmark Forum, Forum in Action Series and the Advanced Course and SELP (in parts) are good. But at the end of the day – the whole curriculum teaches us to create a new view for life, so that we can experience the transformation in ourselves and be at the source of it. But the common thing among graduates is that they get attached to the Landmark Education. They become sales persons for the company and trick people into doing their courses. All the time – not really being the source of transformation; which was of-course the intent of the curriculum for living! Even the people working for the Landmark Education (either as employees or as volunteers) have a feeling that the only way to be is to continuously trick more and more people into doing sales or unpaid voluntary jobs for the Landmark Education. Apparently, not doing some work for Landmark Education – makes you a stupid and dull person, and you will no longer be transformed! Can you see – they are hugging and kissing the signpost and not even bothering about the destination that it is pointing too!

THE FINGER POINTING AT THE MOON IS NOT THE MOON.

8 replies on “Messenger and the Message…”

thanks.. I really hope some of the 'confused' folks at Landmark Education get this one right..

wow….that was refreshing…makes an awesome point of where as human beings we really mess up in distinguishing between the finger and the moon everytime in our lives…..thanks for posting this…

Very good observation. But, is this not the reality of practical life. People get emotionally attached to people, groups & organizations from where they draw some inspiration. Christians get attached to their Churches, Sikhs to Gurudwaras, Muslims to Mosques, Hindus to Temples, etc… and so in the same fashion, Landmark Graduates get attached to Landmark Organization. It seems to be the prevailing trend of the world in ALL SPHERES, without exception. Sometimes we are indebted to the person who introduced us to Landmark – thus appreciating the Finger rather than the Moon.

@Mandi: Sure.. but just because something is normal, doesnt really mean that it is right.. Let me go a step further. Just because something is normal for one person; it need not be normal for another too. My blog post is about the obsession that Landmark Graduates have to ensure that everybody else becomes a devoted follower. I care more about the message (check out my previous posts) than the messenger, in-fact I think even the messengers should!

[…] pandit, but this is how I understood the words. If you want to rant then I suggest you read this post of mine first. Anyways, I think the point Sri Krishna wanted to make is just this – if you perform […]